ISLAMABAD/LAHORE: Premier lawyers’ bodies across the country have stepped up to denounce the government for introducing oppressive amendments to the controversial electronic crimes law, which have been challenged in the Islamabad and Lahore high courts and are set to land in the apex court soon for curbing basic freedoms and fundamental rights of the people.

On Tuesday, the presidential ordinance that criminalises online defamation was challenged in the Islamabad High Court (IHC) by a faction of the Pakistan Federal Union of Journalists (PFUJ), and will be taken up by IHC Chief Justice Athar Minallah on Wednesday (today).

The petition states that the respondents tried to sneak in amendments to Peca at the eleventh hour when only a day before the promulgation of the ordinance, the Senate was in session. It appears the respondents had already prepared the draft of the ordinance and were waiting for the session to end so they could circumvent the due process of legislation.

The petition states the respondents have omitted an important proviso in the amendment and the scope of regulation by the Pakistan Electronic Media Regulatory Authority in case of broadcast media has been done away with. The Constitution calls for promoting democratic values in the country and ensuring fundamental rights to freedom of speech and expression, as well as of the press, it adds.

Lawyers’ bodies come down hard on govt, vow to defend right to freedom of expression, media

On Monday, Chief Justice Minallah, while hearing a petition filed by media personality Mohsin Baig, had expressed displeasure over the misuse of Peca by the Federal Investigation Agency (FIA) and put its Cyber Crimes Wing Director Babar Bakht Qureshi on notice.

Advocate Chaudhry Saeed Zafar assailed the amendments to Peca through a writ petition before the Lahore High Court, arguing the sole motive behind promulgation of the ordinance was to directly attack the independence of the judicial system as well as judges.

The impugned ordinance, he says, is against the fundamental rights to free speech enshrined under Article 19 of the Constitution. He contends the superior courts had time and again ruled that no one, including a government, department or law enforcement agency, could curtail the freedom of speech, expression and press beyond the parameters of Article 19.

He says the judiciary has a duty to review the legislation that breached any provision of the Constitution. He asks the court to declare the impugned ordinance illegal and void, and immediately suspend the operations of the law till a final decision on the petition.

The top lawyers’ representative bodies have dubbed the amendments to Peca an attempt to curb the freedom of speech, opinion and expression.

While the Pakistan Bar Council (PBC) demanded the government immediately withdraw the changes, the Supreme Court Bar Association (SCBA) vowed to challenge the ordinance soon. A day ago, the Sindh High Court Bar Association (SHCBA) had called upon parliament to use its legislative powers effectively to strengthen the nation rather than allow it to slide down the path of oppression.

Not only has the controversial ordinance made online defamation a non-bailable offence, but also broadened the ambit of the FIA in addition to enhancing the punishment from three to five years.

PBC Vice Chairman Hafeezur Rehman Chaudhry and Executive Committee Chairman Muhammad Masood Chishti said the ordinance was an attempt to restrict the freedom of expression and dissenting voices in the media. The government wanted to clamp down on critics and those working towards upholding the rule of law.

They further said laws were already in place to protect the institutions, adding the legal fraternity always supported an independent media and would not accept any attempt against its independence.

SCBA President Muhammad Ahsan Bhoon said the ordinance was ultra vires to the Constitution and the SCBA will challenge it soon. In a statement, Mr Bhoon also criticised the promulgation of the Election (Amendment) Bill 2017 allowing lawmakers or members of local government to visit or address public meetings during elections.

He alleged the ruling elite had once again launched a vicious agenda to silence its political opponents and all those who believed in freedom of speech, opinion and expression, to hide its failures. The Peca ordinance is a classic example of an authoritarian mindset and a reflection of extremism, he further said.

The redressal of the fake news issue needed immediate attention, but any remedy that was contrary to the Constitution and against personal liberty must not be allowed, he stressed.

The SHCBA through a resolution said the ordinance was a “colourable exercise of power” by the president and the federal law minister, regretting parliament was brought into recess only to permit the signing off on a black law.

It is alarming that through these oppressive amendments the so-called sacred cows could sue a critic through a proxy or member of the public. The ordinance tramples the fundamental right to free speech and is a remnant of fascist and dictatorial regimes, the resolution regrets.

In a statement, Punjab Bar Council (PbBC) vice chairman Syed Jafar Tayar Bokhari said the government wanted to silence dissenting voices through force. The legal fraternity would defeat every move of the government to curb free speech and press, he exclaimed.

LHC Bar Association president Maqsood Buttar called the ordinance a black law, saying its purpose was to suppress criticism and scrutiny of the “pathetic performance” of the government in the media.

The Lahore Tax Bar Association also demanded withdrawal of the ordinance, saying it was an attempt to curtail freedom of expression and media.

The PML-N has pledged complete support for the Media Joint Action Committee against Peca. In a statement, PML-N information secretary Marriyum Aurangzeb called the ordinance a “unique blunder” where punishment comes before even defining the crime. “Independent and upright judges have been made to bow down before the administration,” she claimed.

She said the PML-N would fight at all forums to defend the freedom of expression and the press, adding “these forces of fascism” would be defeated.

Opinion | London Breed and the Return of Tough-on-Crime Democrats

Wed Mar 2 , 2022
Yet both the “amateur” and the “professional” should beware. It’s critical for reformers not to misread the great racial awakening. Even as many took to the streets to “defund the police,” city residents, especially those who have endured histories of overpolicing and underprotection, hold complicated views on these issues. Right […] 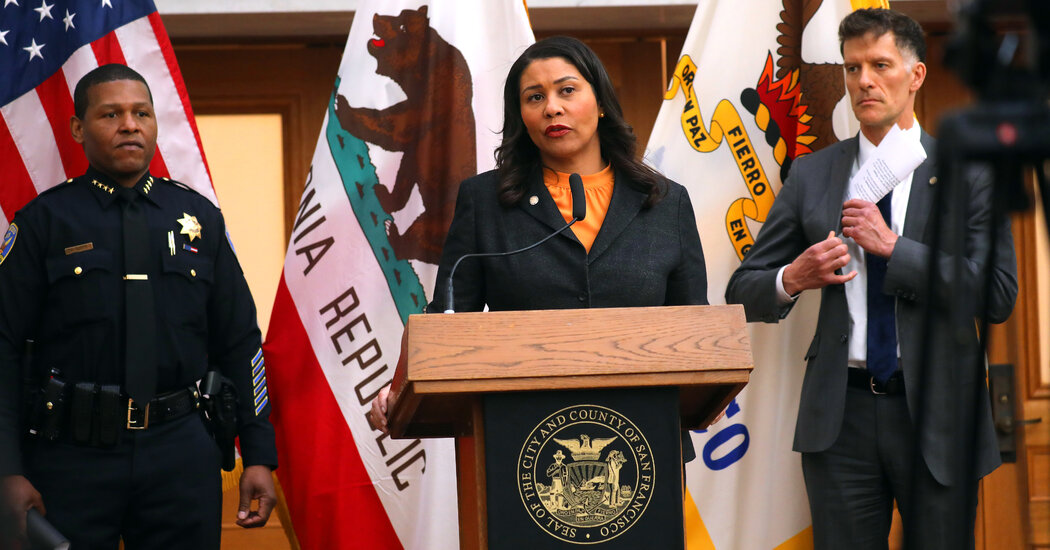