In a noteworthy judgment, the Kerala High Court on Wednesday made several important observations on matrimonial cruelty and the scope of revival of condoned matrimonial offences.

A Division Bench comprising Justice A. Muhamed Mustaque and Justice Sophy Thomas dismissed an appeal filed by a woman seeking to reverse the order of a Family Court which rejected her plea for divorce finding that she had failed to prove any form of matrimonial cruelty allegedly meted out on her.

“It is true that in order to attract ‘cruelty’ in matrimonial life, there is no need of any physical violence. Cruelty can be either mental or physical. But when there is specific allegations of physical cruelty, the person alleging the same is bound to prove it.”

The Court added that when the other party is vehemently opposing the allegations levelled against him, some sort of cogent evidence is expected, especially when there was every opportunity to adduce the same.

“The period of non-co-habitation however long it may be, if it was due to deliberate avoidance or due to pendency of cases filed by one party, the other party cannot be found fault with, when the other party is still ready to continue his/her matrimonial life, and no grounds recognized by law are established against the other party to break their nuptial tie. So legally, one party cannot unilaterally decide to walk out of a marriage, when sufficient grounds are not there justifying a divorce, under the law which governs them, saying that due to non-co-habitation for a considerable long period, their marriage is dead practically and emotionally.“

Other important findings in the case:

1. Concept of cruelty differs from person to person; a few isolated instances over a period of years will not amount to cruelty.

2. When spouses are incapable to arrive at a consensus for dissolving their marriage, the Court can only go by the law and procedure. Their marriage can only be dissolved if they satisfy the statutory requirements.

3. A family is an amalgamation of distinct individual interests; it is difficult to define and demarcate the rights and duties of husband and wife in matrimonial life.

4. No matrimonial offence is erased by condonation; it can revive and give rise to a cause of action for dissolution of marriage if the offending spouse takes unfair advantage of the benevolence shown by the wronged spouse and takes to matrimonial misdeeds again.

5. Long period of non-co-habitation due to deliberate avoidance or pendency of cases filed by one party is not a ground for divorce when the other party cannot be found fault with and is ready to continue the matrimonial life.

The appeal was filed by a woman challenging the degree of a Family Court rejecting her prayer for divorce.

According to the appellant, during her 12 year long stay at the matrimonial home, she was subjected to matrimonial cruelty by her husband and her in-laws in the name of dowry. She alleged that she was not permitted to pursue her higher studies and was neglected by her husband.

The appellant contended that when her father tried to enquire about the cruelty, she was asked to vacate the matrimonial house. Thereafter, she has been living separately in a flat since 2011.

According to her, pursuant to intervention by their friends and family, the respondent also joined her at the flat soon. However, within a month, he allegedly left the flat threatening to take away their son from her.

Thereafter she filed for divorce, return of gold ornaments, custody of the child, and also a petition under the Protection of Women from Domestic Violence Act against him.

Nevertheless, again after persuasion from her family and friends, she agreed to a reunion and withdrew all the cases. The respondent started living with her again from 2015 onwards.

It is the case of the appellant that even after this reunion, there was no mental unity or physical intimacy between them and that now they have been living separately for two years. She argued that their marriage was irretrievably broken.

Accordingly, she moved the Family Court for a divorce on the ground of cruelty, but this was dismissed. Aggrieved by the same, she reached the High Court.

Appearing for the appellant, Senior Advocate Sumathy Dandapani assisted by Advocate Millu Dandapani argued that though the cruelties alleged in the earlier divorce petition was condoned, since the respondent continued his ill-treatment towards her, it will revive and that she is entitled to get a decree of divorce on the grounds urged in the earlier petition as well.

Advocates Dinesh R. Shenoy and A. Joseph George appeared for the respondent and denied all the allegations.

The Court found the following contradictions in her version:

1) Although she had alleged in her plea that she was asked to vacate the residence, according to her testimony, she shifted to a flat due to constant abuse from the respondent and his parents.

2) She said her father had tried to intervene in the matter, but he was not examined despite being the best witness to speak about unlawful demand for dowry. There was nothing on record to show that she was forcefully evicted.

3) No complaints have been filed during 1999-2011, her 12 year-long stay at the matrimonial residence alleging cruelty.

4) Contrary to her allegation, her testimony disclosed that she completed her M.A and thereafter acquired Ph.D after her marriage. In fact, in her Ph.D thesis, she has specifically thanked her in-laws and her husband for the support they rendered for her higher studies.

5) The appellant admitted to having attended classes for music, painting, driving, dance, computer, fashion designing and compering during her stay in her matrimonial home. She was compering in two channels as well. This convinced the court that she had freedom at her matrimonial home for her academic as well as extra-curricular activities and ‘there was every opportunity for her to blossom into an all-rounder’.

6) During evidence, the appellant frequently alleged that she was ill-treated by the respondent physically and mentally. However, not even one incident of physical violence was pleaded by the appellant, and no evidence was produced to prove any such violence.

On these among other grounds, the Court found that the allegations of cruelty up to the first divorce plea in 2011 could not be proved by the appellant to reach a finding that it was injurious to continue with the respondent. Reunion in the year 2015 fortifies that fact, it was observed.

As observed by the Apex Court in Samar Ghosh vs. Jaya Ghosh [(2007) 4 SCC 511], the human mind is extremely complex and human behaviour is equally complicated. The concept of cruelty differs from person to person depending upon his upbringing, level of sensitivity, educational, family and cultural background, financial position, social status, customs, traditions, religious beliefs, human values and their value system.

However, the Supreme Court had clarified that mere coldness or lack of affection cannot amount to cruelty. It had further observed that mere trivial irritations, quarrels, normal wear and tear of the married life which happens in day to day life would not be adequate for grant of divorce on the ground of mental cruelty.

“Married life should be reviewed as a whole and a few isolated instances over a period of years will not amount to cruelty.”

The appellant categorically deposed that she wanted to escape from this relationship and marry another man to lead a respectable and happy married life.

Although her intention was appreciated, the Court noted that when spouses are incapable to arrive at a consensus for dissolving their marriage, it can only go by the law and procedure. The Bench added that only if they satisfy the statutory requirements can a court of law grant a decree of divorce to dissolve their marriage.

Further, the appellant had contended that their marriage was irretrievably broken and there is no chance for a reunion. However, irretrievable breakdown of marriage if at all it existed, is not a ground for divorce recognised by Hindu Law.

Moreover, when one spouse alleges an irretrievable breakdown of marriage, he/she has to plead and prove the grounds recognised by law that lead to such a breakdown.

“If one spouse wants to avoid the other spouse without any justifiable reasons recognized by law and unilaterally takes a decision to break the marital tie, he/she may not get the legal sanction for that separation.”

The Court found that irrespective of caste and creed, marriage is an institution in which interpersonal relationships, usually intimate and sexual, are acknowledged.

The Bench added that family building demands surrender of individual autonomy in favour of mutual reliance and care.

“A family is an amalgamation of distinct individual interests. It is difficult to define and demarcate the rights and duties of husband and wife in their matrimonial life…The mutual rights and obligations undertaken by the couple, forms the basis of their partnership in love, called family, which is the basic unit of the society. Mere trivial irritations, quarrels, normal wear and tear of married life which happens in day to day life may not destroy that institution. In the case in hand, as there is no evidence to prove the matrimonial cruelties or desertion alleged by the wife, her claim for divorce cannot sustain legally.”

The Court further acknowledged that the delay in the justice delivery system may also be adding years to their separation.

“Long years of separation and the bitter battle fought in court with allegations and counter allegations may still keep them away, blocking their reunion. Even for very simple reasons, the spouses may break co-habitation, intending to mend the ways of the other spouse, expecting a re-union after clearing all their apprehensions. But the litigations once begun may take them to unknown shores, never intended at the beginning. That is why we could see a simple claim for maintenance or restitution ending up with divorce.”

As observed by the Apex Court in Narayan Ganesh Dastane vs. Sucheta Narayan Dastane [1975 KHC 183], the condonation of a matrimonial offence is not to be likened to a full Presidential pardon under Art.72 of the Constitution which, once granted, wipes out the guilt beyond the possibility of revival.

“No matrimonial offence is erased by condonation. It is obscured but not obliterated”

Similarly, in Santhosh Kumar S vs. Jayashree Damodaran [2020 (2) KHC 33], it was held that an act of cruelty once condoned can revive and give rise to a cause of action for dissolution of marriage, when the offending spouse exploits and takes unfair advantage of generosity or the benevolence shown by the wronged spouse and takes to matrimonial misdeeds over again. No wrong is permanently wiped out by condonation, but is only hibernated.

However, in this case, the appellant had failed to prove matrimonial cruelty of any kind in her plea. And for the cruelty once condoned to be revived, there should be a repetition of matrimonial wrongs which amounts to cruelty.

Since nothing of this sort could be found in her plea or appeal, the Bench dismissed the appeal.

Sun Feb 13 , 2022
Written by AJ Vicens Feb 8, 2022 | CYBERSCOOP Russian authorities seized the websites of several Russian cybercrime forums Monday, the latest in a string of high-profile actions the government there has taken against cybercriminals. Visitors to the websites for Sky Fraud, a forum for stolen credit card data, were […] 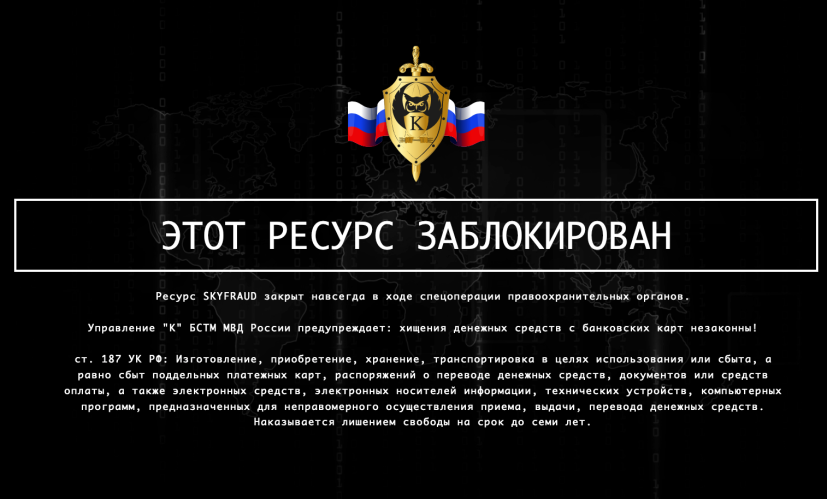