Gov. Kathy Hochul, responding to a number of high-profile crimes that have rattled New Yorkers and to a sharp rise in gun violence during the pandemic, is privately pushing state lawmakers to change the state’s contentious bail law, according to an internal memo obtained by The New York Times.

Ms. Hochul wants to expand the number of crimes eligible for bail and to give judges more discretion to account for the criminal history of those accused of serious felonies, as well as the harm such defendants could pose to others.

Those measures, if enacted, would roll back some of the changes made to the state’s bail law in 2019 by a reform-minded Democratic-led Legislature and would end New York’s status as the only state in the country to bar judges from considering the danger posed by a defendant in making bail decisions.

Ms. Hochul’s proposals, part of a broad 10-part public safety plan, first reported by The New York Post, would allow the police to arrest people for minor repeat offenses that might otherwise be handled with a desk appearance ticket; expand the number of gun crimes that are bail-eligible; and lower the threshold for prosecuting gun trafficking.

Ms. Hochul, a Democrat running this year for her first full term as governor, has come under intense political pressure from Republicans and moderate quarters of her own party to join their efforts to change the state’s bail law.

But her stance may set her on a collision course with legislative leaders, who have expressed little interest in revisiting one of the most explosive and divisive policy issues in Albany — rejecting previous pressure from Mayor Eric Adams, who also favors changes in bail law.

Ms. Hochul is pushing for the bail changes to be included as a nonfiscal element of the state budget, which is due April 1, according to a state official familiar with the discussions. Governors traditionally wield greater leverage in budget negotiations, and attaching the bail changes to the state’s fiscal plan may be one of the few opportunities for Ms. Hochul to secure passage through an unwilling Legislature.

“As the governor has said consistently since becoming governor, she does not negotiate in public,” said Hazel Crampton-Hays, a spokeswoman for the governor. “We look forward to continuing to work with the Legislature to deliver a budget that serves New Yorkers.”

Mike Whyland, a spokesman for Carl Heastie, the Assembly speaker, said Mr. Heastie was not aware of Ms. Hochul’s bail proposal, and declined to comment. A spokesman for Andrea Stewart-Cousins, the Democratic majority leader of the State Senate, did not immediately return a request for comment.

The state’s bail law was overhauled shortly after Democrats assumed full control of the Legislature in 2019 and began spearheading long-sought criminal justice reforms they said were meant to stop criminalizing the poor. One chief objective was to reduce the number of individuals awaiting trial who were incarcerated because they could not afford bail.

The changes drastically limited the ability of judges to impose bail to a select set of crimes, including violent felonies and sex offenses. Most misdemeanors and nonviolent felonies became ineligible, meaning that those charged with such crimes have been released without having to post bail.

But even before the changes were implemented, they faced significant criticism; by early 2020, a broader list of crimes were made eligible for bail.

Even with those amendments in place, Republicans used the changes made to the bail law as a campaign issue in their attempts to cast Democrats as soft on crime, arguing that the revisions had led to the release of dangerous criminals. Some prosecutors and police departments also joined the backlash, blaming the reforms for New York City’s recent increase in murders, shootings and certain other crimes, though there is little data to suggest the law is at fault. A recent poll from Siena College showed that a majority of New Yorkers considered crime a serious problem and wanted the state to amend its bail laws.

Parts of Ms. Hochul’s plan appear aimed at targeting subway crime and the rise of gun violence. Her plan would allow police to arrest people for certain crimes against subway riders and workers, where at present they can only receive desk appearance tickets.

Perhaps the most consequential element of Ms. Hochul’s proposal is her plan to give judges permission to use criteria to consider the danger individuals charged with certain crimes pose to those around them.

Currently, judges can only impose the least restrictive conditions necessary to ensure defendants return to court. Ms. Hochul’s proposal would change that for defendants charged with certain violent crimes and gun crimes.

Criminal justice experts said that adding a so-called dangerousness standard while retaining the use of cash bail made little sense, because even defendants for whom high bail was set could still pay for their release. Others said that such standards often produced racist outcomes in other states.

“The proposal tries to strike a middle ground in giving judges discretion,” said Elizabeth Glazer, a leader of the mayor’s office of criminal justice under Bill de Blasio, the former mayor of New York City. “But the entire system of cash bail is flawed and should be eliminated, as it holds in people with low-level offenses and releases those who pose a risk.”

One of the broadest provisions, intended to crack down on repeat offenders, would make any second offense occurring while a defendant is awaiting trial eligible for bail.

“The data on bail reform speaks for itself: The overwhelming majority of New Yorkers on pretrial release do not commit new crimes and return for future court appearances,” she said, adding in a brief interview, “No longer is this bail reform. This is an entirely new bail bill, which is regressive.”

Experts believe the bail changes alone have had a relatively limited impact on public safety, but the issue has nevertheless come to dominate the political debate around the increase in some categories of crime in New York City.

Some of Ms. Hochul’s rivals in the governor’s race, as well as super PACs, have already spent millions of dollars on television advertisements attacking Ms. Hochul for not taking a public stance on the bail laws.

Ms. Hochul had repeatedly said she was open to having discussions with lawmakers about the issue, and she has unveiled initiatives in recent weeks to combat gun violence, including an interstate task force to crack down on illegal guns.

Representative Thomas Suozzi, a Long Island Democrat running against Ms. Hochul in the primary, has made it the centerpiece of his campaign. On Thursday, he accused Ms. Hochul of copying his plan but also said hers “doesn’t go nearly far enough.”

Ms. Hochul’s plan would allow judges to try minors charged with gun possession in criminal court. Mr. Adams has also supported changing the law that set 18 as the age of criminal responsibility, saying it was being exploited by gang members so as to avoid responsibility for gun crimes.

Data from the Criminal Justice Agency indicated that nearly 50 percent of 16-year-olds arrested in the year after the age of responsibility was raised were later rearrested. But conclusive data on the broader impact of the changes in bail law remains elusive.

The governor’s proposal also targeted the new statute that compelled prosecutors to turn over the evidence on a case to defense lawyers within a tight time frame. The law has imposed a difficult burden on New York prosecutors’ offices since it went into effect, multiplying the amount of paperwork that assistants must handle on each case and sometimes resulting in the dismissal of cases altogether.

The Brooklyn district attorney, Eric Gonzalez, acknowledged to prosecutors in his office in January that the new rules had “presented enormous challenges” and said that his employees had “struggled not to be crushed under the weight” of the new obligations.

Ms. Hochul’s proposal would block cases from being dismissed if the substance of the evidence had already been provided to defense lawyers, and would exclude traffic infractions from the evidence requirements entirely.

Finally, the governor has proposed increasing funding to pretrial services and for the treatment of the mentally ill.

Fri Mar 18 , 2022
CLEARWATER, Fla. — Rhys Hoskins is the son of attorneys. Growing up, he would sit at the dinner table and listen to his father and late mother discuss the merits of various cases. By osmosis, he figured he knew all about hard-fought negotiations over complex legal matters. Then he advocated […] 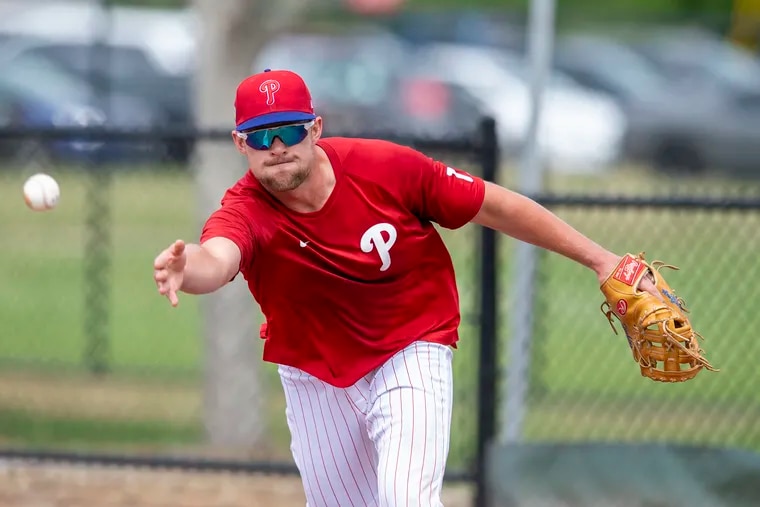