A new law requires most mental health providers to give patients detailed upfront cost estimates, including a diagnosis. Therapist are concerned it could discourage patients from committing to a course of treatment.

A new law requires most mental health providers to give patients detailed upfront cost estimates, including a diagnosis. Therapist are concerned it could discourage patients from committing to a course of treatment.

Groups representing a range of mental health therapists say a new law that protects people from surprise medical bills puts providers in an ethical bind and could discourage some patients from care.

The therapists take no issue with the main aim of the legislation, which is to prevent patients from being blindsided by bills, usually for treatment received from out-of-network medical providers who work at in-network facilities.

Instead, they are concerned about another part of the law — a price transparency provision. That provision requires most licensed medical practitioners to give patients detailed upfront cost estimates, including a diagnosis, and information about the length and costs involved in a typical course of treatment. That’s unfitting for mental health care, therapists say, because diagnoses can take time and sometimes change over the course of treatment.

Finally, if they blow the estimate by at least $400, the law says uninsured or self-pay patients can challenge the bills in arbitration.

Arguing that the rule is burdensome and unnecessary, mental health providers wrote a Jan. 25 letter to the Department of Health and Human Services, seeking an exemption from the “good faith” estimates for routine mental and behavioral health services. The letter was signed by 11 groups, including the American Psychological Association, the National Association of Social Workers, the American Psychiatric Association, and the Psychotherapy Action Network.

Some also worry that the law will allow insurance companies to play a larger role in dictating what even non-network mental health therapists can charge, although policy experts say it isn’t clear how that could happen. Although exact figures are not available, it’s estimated that between one-third to one-half of psychologists are not in-network with insurers, the psychologists’ association said. And those numbers do not include other practitioners, such as psychiatrists and licensed clinical social workers, who are also out of network.

“We got thrown into this bill, but the intention [of the law] was not mental health but high-cost medical care,” said Jared Skillings, chief of professional practice with the American Psychological Association. “We’re deeply concerned that this [law] inadvertently would allow private insurance companies to set regional rates across the country that, for independent practitioners, would be a race to the bottom.”

Therapy costs vary widely around the U.S. and by specialty, but generally range from $65 an hour to $250 or more, according to the website GoodTherapy.

The good faith estimates must be given this year to uninsured or self-pay patients for medical or mental health care services. They were included in the No Surprises Act as part of a broader effort to give patients a good idea of cost, both per visit and for a course of treatment, in advance.

Therapists say their professional codes of ethics already require disclosure to patients of per-visit costs. Requiring diagnostic billing codes in the estimate before even seeing a patient — as they interpret the rule — is unethical, they argue, and tallying up what might be weeks or even months of treatment costs could keep some patients from undergoing care.

“If people see a large dollar amount, they might be intimidated or scared into not getting help at all,” said Linda Michaels, a private practice therapist in Chicago and co-chair of the Psychotherapy Action Network.

The counterargument, though, is that one of the law’s aims was to provide patients with pricing information — for mental health services or medical care — that is less opaque and more similar to what they’re used to when shopping for other types of goods or services.

Benedic Ippolito, an economist at the American Enterprise Institute, said he is sympathetic to medical providers’ concerns about the extra administrative burden. But “giving consumers a better sense of financial obligation they are exposed to and imposing some cost pressure on providers are both reasonable goals,” he said.

Even among providers, there is no universal agreement on how burdensome the estimates will be.

“It’s not an unreasonable thing, frankly, for psychiatrists, not just plastic surgeons or podiatrists, to say, ‘If you want me to do this and you’re not covered by insurance or whatever, it will cost you X amount for the whole episode of care and this is what you get in return,'” said Dr. Robert Trestman, chair of psychiatry and behavioral medicine at the Virginia Tech Carilion School of Medicine. Although he serves on an American Psychiatric Association committee, he was voicing his own opinion.

The Centers for Medicare & Medicaid Services said mental health providers are not exempt from the rules about good faith estimates, in a written statement to KHN. It added, however, that the agency is working on “technical assistance geared toward mental health providers and facilities.” Federal agencies often issue additional clarification of rules, sometimes in the form of FAQs.

The No Surprises Act took effect Jan. 1. Its thrust was to bar medical providers from sending what are called surprise or “balance” bills to insured patients for out-of-network care provided in emergencies or for nonemergency situations at in-network facilities. Common before the law passed, such bills often amounted to hundreds or thousands of dollars, representing the difference between the amount insurers paid toward out-of-network care and the often much higher amounts charged.

Now, insured patients in most cases will pay only what they would have been billed for in-network care. Any additional amount must be worked out between their insurer and the provider. Groups representing emergency doctors, anesthesiologists, air ambulance providers, and hospitals have filed lawsuits over a Biden administration rule that outlines the factors independent arbitrators should consider when deciding how much an insurer must pay the medical provider toward disputed bills.

Most mental health services, however, aren’t directly touched by this part of the directive because treatment is not typically performed in emergency situations or in-network facilities.

Instead, the complaint from mental health providers focuses on the good faith estimates.

Additional rules are expected soon that will spell out how upfront estimates will be handled for people with health coverage. In their letter to HHS, the behavioral health groups say they fear the estimates will then be used by insurers to limit treatment for insured patients, or influence pay negotiations with therapists.

Several policy experts say they do not think the law will affect mental health reimbursement in most cases.

“Mental health professionals will have the exact same ability to bill out-of-network, to have patients agree to whatever market price is for their services,” said Loren Adler, associate director of the USC-Brookings Schaeffer Initiative for Health Policy, who has long studied balance billing issues. “Nothing about the No Surprises Act restricts that.”

Some of the therapy groups’ concerns may stem from misreading the law or rules implementing it, say policy experts, but they still reflect the confusion providers share surrounding the rollout of the law.

As for how to handle pre-treatment diagnoses that are needed to deliver good faith estimates, CMS said in its email to KHN that providers could estimate costs for an initial screening, then follow up with an additional estimate after a diagnosis.

“No one is going to be forced to make a diagnosis of a patient they have not met,” Adler said.

KHN (Kaiser Health News) is a national newsroom that produces in-depth journalism about health issues. Together with Policy Analysis and Polling, KHN is one of the three major operating programs at KFF (Kaiser Family Foundation). KFF is an endowed nonprofit organization providing information on health issues to the nation.

Sat Feb 12 , 2022
A Telenor Myanmar customer has complained to Norway’s data protection authority that a planned sale of the business risks a potentially dangerous breach of privacy By ELAINE KURTENBACH AP Business Writer February 8, 2022, 6:57 AM • 3 min read Share to FacebookShare to TwitterEmail this article BANGKOK — A […] 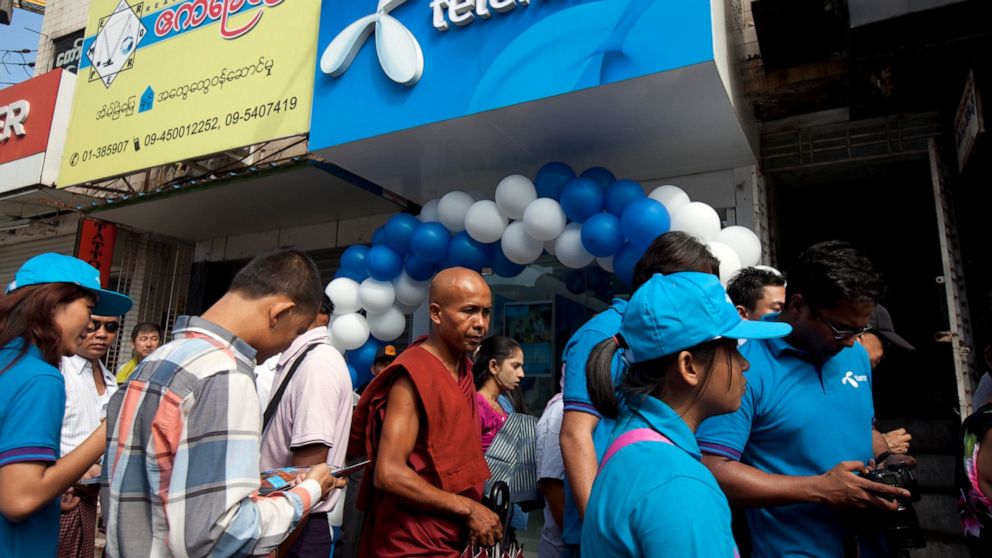