Dark clouds and pouring rain greeted the steam train as it chugged to a stop in Sioux Falls, S.D., on June 1, 1891. Accompanied by her maid and private secretary, a smartly dressed woman of obvious high standing descended from the plush first-class rail car and took stock of the small city before her on the banks of the Big Sioux River.

The entourage, which also included her dog, Tweedles, then climbed into a horse-drawn carriage and rode to the well-appointed Cataract Hotel. This oasis of opulence on what was then the edge of the American frontier would be their home for the next three months.

The woman — 37-year-old Baroness Margaret Laura Astor De Stuers, known as Maggie since childhood — had undertaken this four-day trek from the East Coast so she could establish legal residency in Sioux Falls. While this was the end of her 1,500-mile rail trip, it was only the beginning of the New York City socialite’s journey to find personal independence and a new life.

The baroness — like tens of thousands of other women in the late 19th and early 20th centuries — traveled to this remote outpost in search of divorce. They sought marital emancipation by relocating — temporarily, in most cases — to the state with the most lax divorce laws in the country. All that was required was 90 days of residency.

Before Nevada allowed quickie divorces in 1931, South Dakota held the title of divorce capital. For a period of about 20 years, the state was known as the Divorce Colony — so labeled by news media, cultural critics and evangelicals alarmed by the trend of migratory divorces. Before statehood in 1889, the Dakota territory had the country’s biggest increase in divorces — 6,691 percent — between 1882 and 1886.

In the culturally repressive era of the 1890s, ending a marriage was social anathema — and virtually impossible legally. Most states had near-blanket laws against divorce, which was viewed as a form of moral decay.

Much like antiabortion regulations before Roe v. Wade — and perhaps again now that the Supreme Court has overturned that ruling — divorce laws reflected the religious and political ideology of the day. Many states allowed divorce only in cases where adultery could be proven — a difficult legal process. A few states, like South Carolina, had no provision for divorce.

“Women were at an extreme disadvantage then,” said April White, author of the book “The Divorce Colony: How Women Revolutionized Marriage and Found Freedom on the American Frontier,” published last month. “A man could simply walk away from a marriage, but a woman had few rights under the law and faced extreme societal prejudice if they didn’t have a husband.”

It was different in the West, though. New states and territories had some of the most progressive laws in the land. The pioneers recognized that legislation needed to reflect the reality of living on the frontier, where life was hard and sometimes short.

White said Sioux Falls became a top divorce destination due to its relative accessibility. “Sioux Falls was most similar to the experience these people would have known from New York and Chicago. It had many of the amenities they were looking for, even though it was a city of 10,000 residents.”

While divorce was available to both sexes in South Dakota, it was embraced by women by nearly a 2-to-1 ratio — not a surprise given the legal and cultural restraints placed on women at a time when they had virtually no political power.

“The lack of divorce had a really profound impact on the way women could function in the world,” White said. “Much like abortion in the 20th century, divorce provided women with greater access to participating in society — whether through careers, education or other factors. It improved the lives of many women.”

Because of its location in the Upper Plains, Sioux Falls was a hub of commerce. Five major rail lines served the city, and the Cataract Hotel became a luxurious way station. As word of lax divorce laws spread eastward, the grand hotel — equal to those in New York, Boston and Chicago — was the perfect place to live until residency could be established while waiting to negate nuptials.

In 1891, Maggie rented a suite of rooms at the Cataract. She later bought a home to cement her claim of residency in South Dakota. Though she did not announce her intentions, she drew the attention of residents and the media as a woman without her husband. At the time, the phrase “going to Sioux Falls” was euphemistic for getting a divorce.

On July 14, six weeks after Maggie arrived in the city, the New York World reported on its front page that she was living in “the Divorce Colony.” It was viewed as a major scandal, since she was a descendant of real estate magnate John Jacob Astor and niece of Caroline Astor, matron of the ultrawealthy family and leader of “The Four Hundred” club, a group of the most influential New Yorkers at the time.

Cracks in the facade soon appeared, however. Maggie tried to divorce her husband in 1890, but her aunt sniffed out the plot and convinced her to return to Paris. Even though Mrs. Astor’s own marriage was a sham — she essentially lived apart from her husband because of his drinking and carousing — she would not tolerate the disgrace of divorce within the family. That left Sioux Falls as one of Maggie’s only options.

“She is one of the first big names that goes out there,” White said. “Maggie really sets the dominos in motion. She is the spark that turns everyone’s attention to Sioux Falls.”

Maggie’s plans became more apparent when her attorney filed her case at the Minnehaha County Courthouse in Sioux Falls on Sept. 3, 1891, 94 days after she moved to South Dakota. Those files were sealed until her husband could be served with papers in Paris three weeks later. That’s when the media storm descended like a Great Plains tornado. Reporters from major newspapers across the nation started filing stories from Sioux Falls.

In her divorce suit, Maggie alleged cruelty by De Stuers and concern that he was plotting to steal her inheritance. She described how he had taken control of finances and had tried to have her committed to a mental institution.

De Stuers countered that it was his wife who was the unkind one, displaying a lack of affection toward him and their children. He also alleged that Maggie was involved in an adulterous affair with a man posing as her private secretary under the name William Elliott. In reality, he was William Elliott Zborowski, also a wealthy New York socialite.

When abortions were illegal — and how women got them anyway

The case went before Judge Frank R. Aikens on Feb. 8, 1892. The only testimony given was by Maggie and her maid. De Stuers did not travel from Paris for the trial. Instead, he had his attorney argue the case while presenting numerous depositions in his defense.

Aikens handed down his decision a month later, on March 5. In granting the absolute divorce, he found De Stuers guilty of “acts of extreme cruelty” against his wife.

Two days after the judgment was announced, Maggie was back at the courthouse. This time, she was there with Zborowski, requesting a marriage license. They were married about half an hour later in her suite at the Cataract Hotel.

“Most women in that era needed to remarry,” White said. “It was a path to security and respectability. Maggie probably didn’t have to remarry. She had a name and a lot of money. I think she really loved her second husband and wanted to be with him.”

The Divorce Colony would be shuttered in 1908, when South Dakota changed its residency requirement to one year. By then, public opinion had shifted. Two years earlier, President Theodore Roosevelt had proposed a constitutional amendment to enable Congress to set national marriage and divorce standards. When that effort failed, many states began altering their divorce laws to reflect changing cultural attitudes, though the first no-fault divorce law would not be enacted until 1970 in California.

White’s book cites the struggle of women like Maggie De Stuers in trying to free themselves from marriages they no longer wanted. In many ways, they were pioneers in forcing legislatures and society to reexamine how divorce was enforced and perceived.

How women invented book clubs, revolutionizing reading and their own lives

“These women changed the way we look upon divorce today,” the author said. “Those brave acts were only meant to be personal, but they ended up turning the tide toward the attitudes and access to divorce.”

Maggie found freedom and love in her new marriage, though her joy would be short-lived. The couple had a child together after rejoining high society in New York. Zborowski took up the new sport of auto racing and was killed in an accident in 1903. Maggie died eight years later. Their son also died in a racing accident in 1924.

In 1891, Maggie couldn’t have foreseen those tragedies. She wanted only the freedom to live the life she desired. She told a reporter that year, “I made up my mind to leave my husband to save myself.”

Tue Sep 20 , 2022
TALLAHASSEE — Acting on one of the most emotionally charged issues of the 2022 legislative session, Gov. Ron DeSantis on Friday vetoed a measure that would have overhauled the state’s alimony laws. DeSantis’ veto marked the third time that supporters of changing the alimony system have successfully shepherded bills through […] 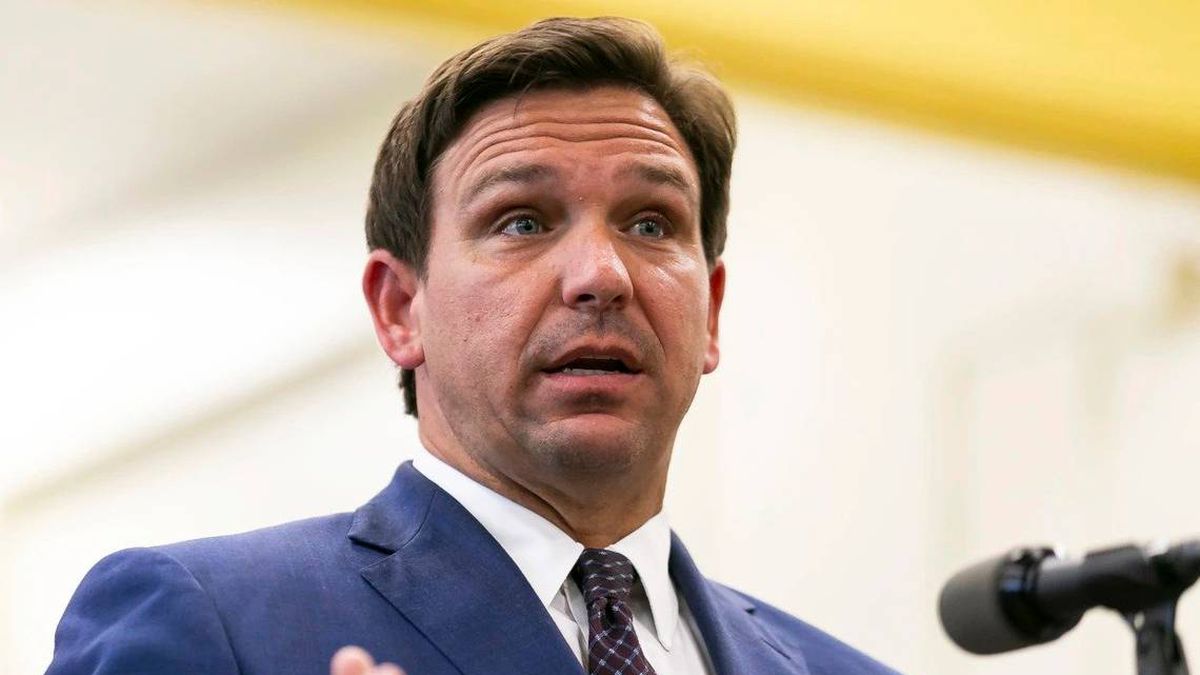