WASHINGTON — The Supreme Court ruled on Friday that abortion providers in Texas can challenge a state law banning most abortions after six weeks, allowing them to sue at least some state officials in federal court despite the procedural hurdles imposed by the law’s unusual structure.

But the Supreme Court refused to block the law in the meantime, saying that lower courts should consider the matter.

The development was both a minor victory for supporters of abortion rights and a major disappointment to them. They had hoped that the justices would reverse course from a Sept. 1 ruling that had allowed the law, the nation’s most restrictive, to go into effect, causing clinics in Texas to curtail performing the procedure and forcing many women seeking abortions to travel out of state.

“We will continue to seek justice in the shred of the case that the court has allowed to go forward and seek every other legal means to stop this catastrophic law,” said Nancy Northup, the president of the Center for Reproductive Rights, which represents the providers challenging the law.

The decision provided further evidence that the Supreme Court’s newly expanded conservative majority is intensely skeptical of abortion rights. At an argument in a separate case last week, the court seemed prepared to uphold a Mississippi law that bans most abortions after 15 weeks, a decision that would be flatly at odds with the court’s abortion precedents.

Opponents of abortion welcomed the court’s decision in the Texas case.

“We celebrate that the Texas Heartbeat Act will remain in effect, saving the lives of unborn children and protecting mothers while litigation continues in lower courts,” said Marjorie Dannenfelser, the president of Susan B. Anthony List, an anti-abortion group.

She added that the group was anxiously awaiting a ruling in the Mississippi case, calling it “the biggest opportunity in generations.”

The decision in the Texas case was fractured, and the majority endorsed only a narrow path to challenge the law. It allowed suits only against state licensing officials like the executive director of the Texas Medical Board, who are authorized to take disciplinary actions against abortion providers who violate the Texas law, known as Senate Bill 8.

The abortion providers “have plausibly alleged that S.B. 8 has already had a direct effect on their day-to-day operations,” Justice Neil M. Gorsuch wrote for eight of the nine justices. “And they have identified provisions of state law that appear to impose a duty on the licensing-official defendants to bring disciplinary actions against them if they violate S.B. 8.”

Only Justice Clarence Thomas dissented on that point.

In partial dissents, they wrote that they would have allowed more comprehensive challenges, authorizing suits against the state’s attorney general and court clerks. Justice Sotomayor wrote that the court’s ruling could be evaded by a tweak to the Texas law, which generally bars state officials from enforcing it and instead deputizes private individuals to sue anyone who performs the procedure or “aids and abets” it.

Justice Sotomayor suggested that the court had given Texas lawmakers a road map to avoid review in federal court.

“The dispute is over whether states may nullify federal constitutional rights by employing schemes like the one at hand,” she wrote. “The court indicates that they can, so long as they write their laws to more thoroughly disclaim all enforcement by state officials, including licensing officials.”

Marc A. Hearron, a lawyer who argued on behalf of the abortion providers in the Supreme Court, said that even a successful suit against state licensing officials would give the providers only limited relief from the effects of the law.

A court could forbid licensing officials from taking disciplinary action against doctors, nurses and pharmacists who violated the law, Mr. Hearron said. But such an injunction, he said, would not bar lawsuits from private parties seeking monetary damages from clinics, doctors and others who provide abortions or help women obtain them.

“Make no mistake,” he said. “While the court allowed our legal challenge to proceed against some state licensing officials, an injunction against those officials will not block Texas’ bounty-hunting scheme.”

In his own partial dissent, Chief Justice Roberts wrote that the Texas law was a calculated attempt to undermine the authority of the Supreme Court. The law is “contrary to this court’s decisions,” including Roe v. Wade, he wrote, and “has had the effect of denying the exercise of what we have held is a right protected under the federal Constitution.”

“The clear purpose and actual effect of S.B. 8 has been to nullify this court’s rulings,” the chief justice wrote, adding that “it is the role of the Supreme Court in our constitutional system that is at stake.”

Supporters of abortion rights reacted to the ruling with dismay.

“The court has abandoned its duty to ensure that states do not defy its decisions,” Ms. Northup said.

Justice Gorsuch stressed that the court’s ruling was tentative and limited to procedural questions.

“In this preliminary posture,” he wrote, “the ultimate merits question — whether S.B. 8 is consistent with the federal Constitution — is not before the court. Nor is the wisdom of S.B. 8 as a matter of public policy.”

Justice Gorsuch wrote that there were other ways to challenge the law beyond suing state officials in federal court, including by raising its unconstitutionality as a defense in a state-court lawsuit brought under the law. He also noted that a state court judge had ruled in favor of abortion providers on Thursday.

That judge found that several procedural aspects of the law violated the Texas Constitution, including ones allowing people who had suffered no injury to sue and setting a minimum recovery of $10,000.

Abortion clinics in Texas welcomed the state-court ruling but said that only a favorable decision from the Texas Supreme Court or the U.S. Supreme Court would allow them to start providing the procedure again without fear of crippling financial liability.

The most restrictive in the country. The Texas abortion law, known as Senate Bill 8, amounts to a nearly complete ban on abortion in the state. It prohibits most abortions after about six weeks and makes no exceptions for pregnancies resulting from incest or rape. The law has been in place since Sept. 1.

The Supreme Court’s decision in the Texas case came less than two weeks after the court heard a direct challenge to the right to abortion established in 1973 in Roe, in a case about a Mississippi law that bans most abortions after 15 weeks. Roe prohibits states from banning abortion before fetal viability, the point at which fetuses can sustain life outside the womb, or about 23 to 24 weeks into a pregnancy.

The court’s six-member conservative majority seemed prepared to uphold the Mississippi law, and several justices indicated that they would vote to overrule Roe outright. A decision in the case is not expected until late June.

The Texas law flouts Roe’s viability line by barring abortions once fetal cardiac activity can be detected, usually around six weeks of pregnancy.

The law was challenged by abortion providers and the Biden administration. In addition to the court’s decision in the abortion providers’ case, it also issued a brief, unsigned opinion on Friday dismissing the Justice Department’s appeal, with only Justice Sotomayor noting a dissent.

The court’s earlier encounter with the law left the justices bitterly divided along the same basic fault line as on Friday, with Chief Justice Roberts joining the court’s three more liberal members in dissent.

The majority opinion in that earlier ruling, issued just before midnight on Sept. 1, was unsigned and consisted of a single long paragraph. It said that the abortion providers who had challenged the law in an emergency application had not made their case in the face of “complex and novel” procedural questions. The majority stressed that it was not ruling on the constitutionality of the Texas law and did not mean to limit “procedurally proper challenges” to it.

Each of the dissenting justices issued an opinion in that earlier ruling.

“The court’s order is stunning,” Justice Sotomayor wrote. “Presented with an application to enjoin a flagrantly unconstitutional law engineered to prohibit women from exercising their constitutional rights and evade judicial scrutiny, a majority of justices have opted to bury their heads in the sand.”

The case returned to the Supreme Court on two separate tracks. After the court rejected the providers’ request for emergency relief, the Justice Department filed its own challenge to the law, one that it said was not subject to the procedural barriers the providers had faced.

The abortion providers also returned to the court, asking the justices to use an unusual procedure — “certiorari before judgment” — to leapfrog the appeals court and decide whether they were entitled to sue.

The Supreme Court agreed on Oct. 22 to decide both cases, putting them on an extraordinarily fast track. It heard arguments just 10 days later, on Nov. 1, focusing on the question of whether the providers and the government were entitled to sue in light of the law’s unusual structure.

The justices differed about whether the court had moved swiftly enough.

“The court should have put an end to this madness months ago, before S.B. 8 first went into effect,” Justice Sotomayor wrote. “It failed to do so then, and it fails again today.”

“The court’s delay in allowing this case to proceed has had catastrophic consequences for women seeking to exercise their constitutional right to an abortion in Texas,” she added.

Justice Gorsuch responded that “this case has received extraordinary solicitude at every turn.” The emergency application that gave rise to the court’s Sept. 1 order, he wrote, was resolved in days. The latest opinions, he added, were issued fewer than 50 days after the court agreed to hear the case.

Sun Dec 19 , 2021
SACRAMENTO, Calif. (AP) — California Gov. Gavin Newsom on Saturday pledged to empower private citizens to enforce a ban on the manufacture and sale of assault weapons in the state, citing the same authority claimed by conservative lawmakers in Texas to outlaw most abortions once a heartbeat is detected. California […] 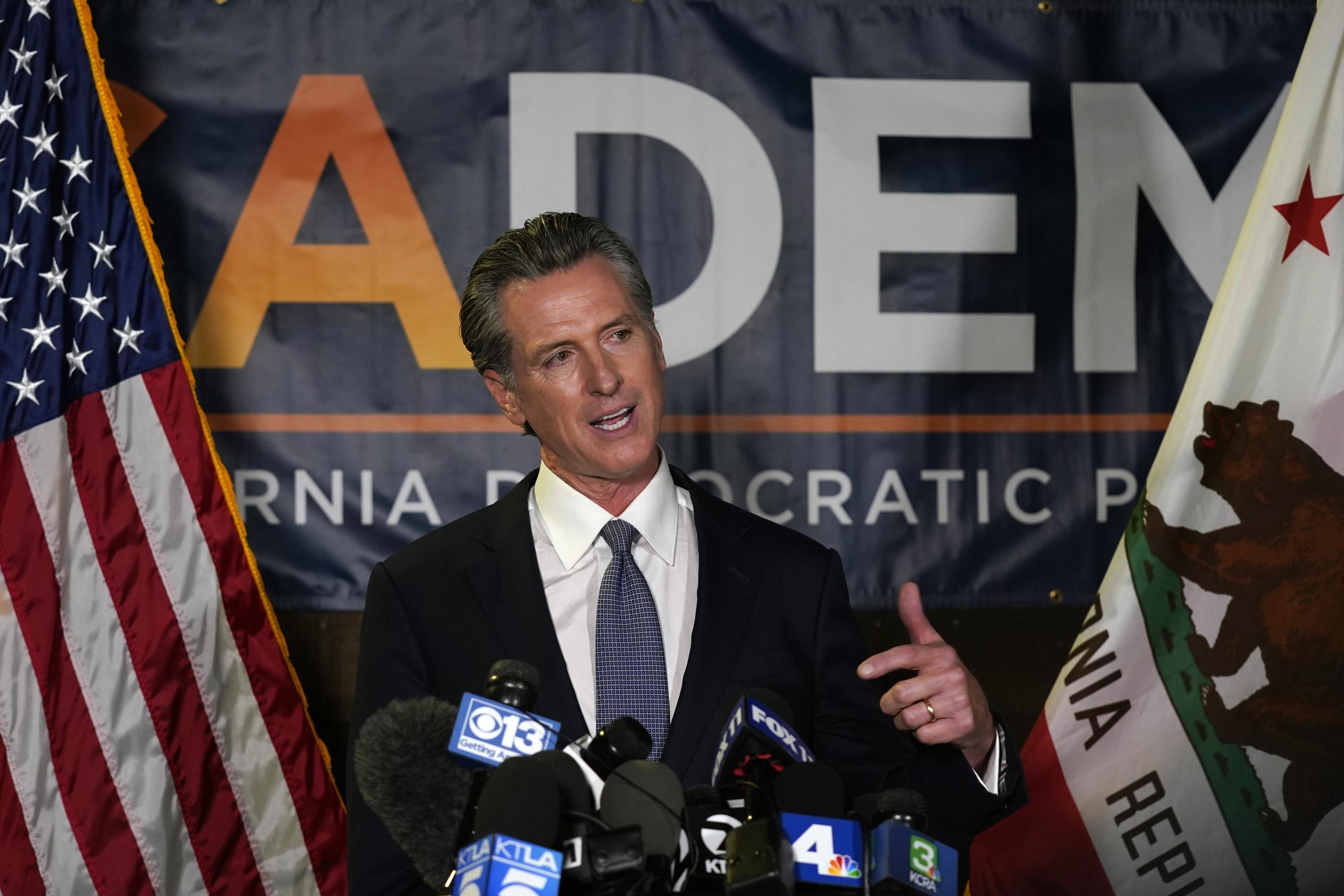