Today is World Press Freedom Day; it falls at a time of unprecedented democratic backsliding. As the violent Russian invasion of Ukraine plays out and the aftermath of Covid-19 continues to embolden autocratic regimes, the need for independent media has never been more apparent. With its key watchdog function, the press has an indispensable role to report without censorship or restraint in the public interest, to highlight democratic deficits, and to demand accountability.

In recent years, legitimate reporting by journalists has been undermined by populist leaders, even in supposedly democratic states, leaving the truth-tellers and the media outlets they work for often subjected to harassment. They are silenced with the purpose, or effect, of stifling scrutiny and debate on matters of public importance.

One key tool for autocrats pursuing such campaigns has been criminal defamation. In many countries around the world, criminal defamation laws are deployed to stifle dissent, muzzle independent media, and suffocate political speech. Less than two weeks ago, Terry Xu, the editor of the now defunct The Online Citizen website in Singapore, was jailed for three weeks. His crime: publishing a letter on the site in which the author alleged “corruption at the highest echelons” of the government.

Cases like this illustrate how criminal defamation laws chill political speech and undermine media freedom. There can be few greater disincentives for public interest journalism than the prospect of an arrest, a criminal trial, a conviction, a criminal record, and jail time or a substantial fine, just for doing one’s job.

Criminal sanctions ought to have no place in the modern law of defamation. If legislatures are not willing to dispense with these outdated and draconian laws, then it is the role of regional human rights courts and national courts, applying established international human rights law, to strike them down.

Criminal defamation laws continue to blight the statute books of many countries that are members of the Organization of American States. In a recent landmark case brought against Ecuador, the Inter-American Court of Human Rights (IACtHR) considered the compatibility of criminal defamation laws with the right to freedom of expression protected under Article 13 of the American Convention on Human Rights . The IACtHR asked the High Level Panel of Legal Experts on Media Freedom, on which we serve, to intervene as an amicus curiae. The Court’s decision, although little reported, is of real significance for media freedom in the region.

The case, Emilio Palacio Urrutia and Others v. The Republic of Ecuador, concerned the lawfulness of criminal defamation statutes as applied to El Universo, one of Ecuador’s most well-established and widely circulated newspapers, its columnist (Palacio), and its three directors.

In 2011, Palacio, a journalist working for El Universo, had published an opinion column criticizing then-President Rafael Correa. The context of the publication was a protest in September 2010 by the police, resulting in the death of two policemen, two soldiers, and a student. Palacio’s article alleged that Correa (whom he called the ‘dictator’) had ordered firing at will and without warning in a hospital filled with civilians.

Following the president’s criminal complaint against Palacio and three directors of the newspaper, on the basis of aspects of the Criminal Code (which punished “serious defamation against the authorities”), the Ecuadorian courts convicted the defendants, sentencing them to three years in jail, and ordering them to pay US$30 million to Correa. El Universo was also ordered to pay US$10 million.

The El Universo defendants petitioned the Inter-American Commission on Human Rights, which brought the case to the IACtHR. The High Level Panel was asked by the Court to intervene, which it did by written submissions on June 14, 2021.

The IACtHR held that the criminal sanction against El Universo was neither necessary nor proportionate under Article 13, and that it “generated a chilling effect that inhibited the circulation of ideas and information.”

Palacio’s article referred to a matter of public interest – the events of the uprising were important in the political life of Ecuador, and Correa was a central actor in those events and in subsequently considering a pardon for those involved. Moreover, in context, the article was an opinion – Palacio was expressing his criticism of Correa’s conduct.

The IACtHR referred to its previous jurisprudence on the issue of the use of criminal defamation. In Álvarez Ramos v. Venezuela. Preliminary Objection, Merits, Reparations and Costs (Judgment of August 30, 2019. Series C No. 38), the IACtHR held that a criminal prosecution is the most restrictive measure to freedom of expression, its use must be exceptional, and “the use of criminal law for disseminating news of this nature would directly or indirectly produce an intimidation that would ultimately limit freedom of expression and prevent the public scrutiny of conduct that violates the legal system.”

In the El Universo case, the IACtHR appears to have moved one step further – it arguably held that criminal defamation should not be available in this context at all. The Court concluded that, within a reasonable period of time, Ecuador must adopt legislative measures to “prevent public officials from bringing suits for defamation and libel with the aim to silence criticism of their actions in the public sphere.”  As part of its compliance with this measure, the State must establish alternatives to criminal proceedings for the protection of the honor of public officials with respect to opinions related to their performance in the public sphere.

This finding suggests that the IACtHR will not permit the criminal law to be used in defamation cases concerning matters of public interest – alternatives to criminal proceedings must be established, and not only in Ecuador.

And even in the civil law context, the Court held that the amount of compensation awarded to Correa was also “clearly disproportionate,” and that disproportionate civil sanctions “can clearly be as or more intimidating and inhibiting for the exercise of freedom of expression than a criminal sanction.”

There are thus at least two major implications for media freedom in the region that flow from this important judgment.

First, the judgment appears to mark a final nail in the coffin of criminal defamation in the region, at least in so far as expression of opinions on matters of public interest about public persons is concerned. Such laws will simply not pass muster under Article 13 of the Convention. This interpretation of the judgment – that it goes further than the Álvarez Ramos case — appears to be confirmed in the joint concurring judgment of Judges Eduardo Ferrer Mac-Gregor and Ricardo Perez, and of Judge Humberto Sierra.  The judgment should thus be interpreted as confirming that criminal law has no place to punish speech in a system of democracy that values freedom of expression on matters of public interest.

Secondly, the El Universo judgment itself makes reference – for the first time in the IACtHR’s jurisprudence – to the concept of “SLAPP” suits:

“The Court considers that the recourse by public officials to the courts to file libel or defamation suits, not with the objective of obtaining a rectification, but rather to silence criticism of their actions in the public sphere, constitutes a threat to freedom of expression. This type of process, known as “SLAPP” (strategic lawsuits against public participation), constitutes an abusive use of judicial mechanisms that should be regulated and controlled by States, with the aim of allowing the effective exercise of freedom of expression.”

This is a very significant development in the region’s jurisprudence on media freedom and freedom of expression.  As the joint concurring judgment of Judges Ferrer Mac-Gregor and Perez points out, the injunction that Ecuador adopt legislative measures to prevent public officials from bringing libel and slander suits to silence their critics (known as SLAPP suits, for `strategic lawsuit against public participation’) “opens the door to the creation of procedural mechanisms that prevent those who are sued by the authorities, especially journalists and the media, from being silenced or disproportionately affected by civil suits.”

At once, then, the El Universo judgment serves to strengthen media freedom on at least two levels. It joins the chorus of judgments across the world repudiating the use of criminal defamation – a historic legal tool to stifle dissent. But it also hints at the need for legislative measures to regulate SLAPP suits.

The Beginning of the End for Criminal Defamation in the Americas? The El Universo Case

Sat May 7 , 2022
STATEN ISLAND, N.Y. — Amazon may have violated labor law in an attempt to dissuade Staten Island workers from unionizing, according to an Associated Press report. On Friday, the National Labor Relations Board (NLRB) said it found merit in a charge from Staten Island’s Amazon Labor Union (ALU) that Amazon […] 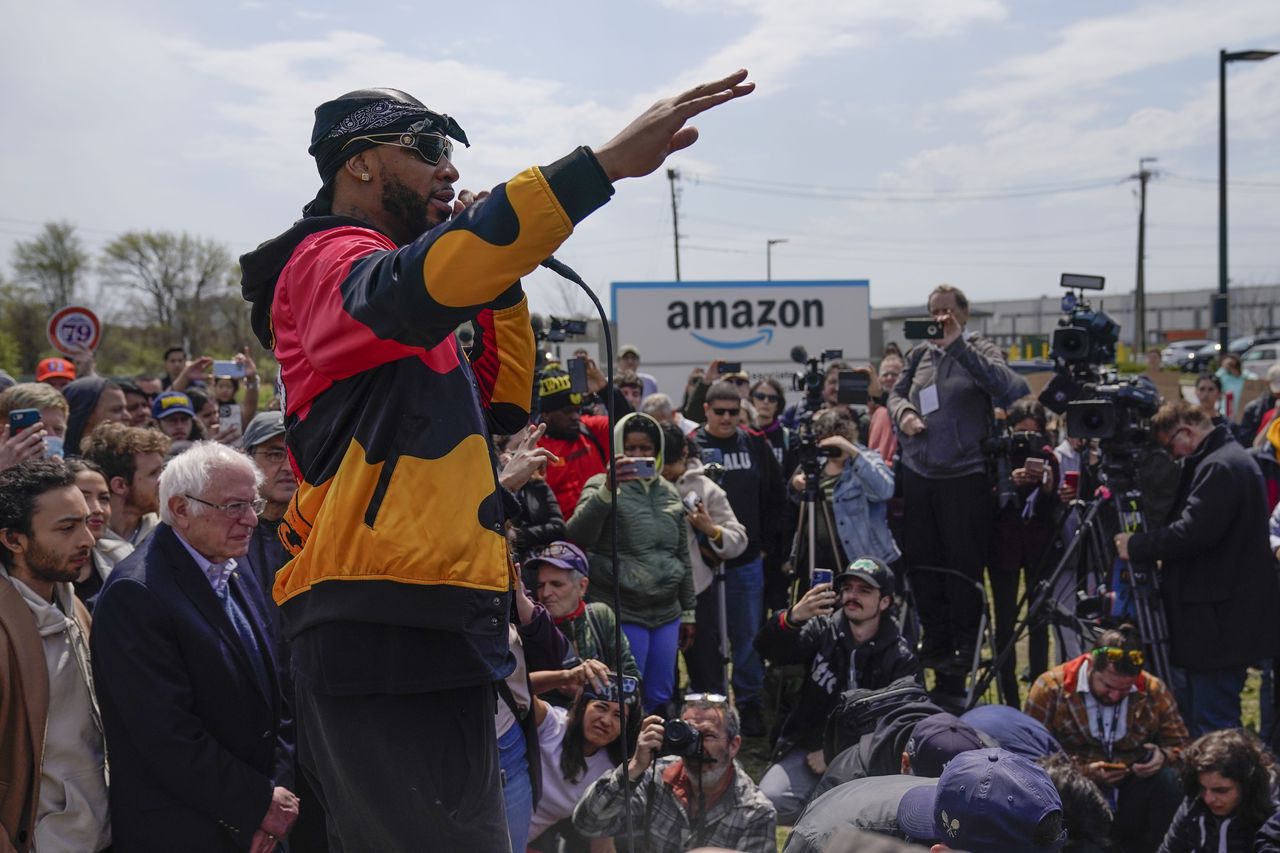