In three weeks, it will not only be illegal to terminate a pregnancy after 24 weeks, but every person seeking an abortion, even a legal abortion, will have to undergo an ultrasound. In early stages of pregnancy, that means having a camera slid into the vagina, not an over-the-belly scan.

“It has to be inserted and then moved around so they can get an accurate depiction of what is going on in a person’s uterus,” said Dalia Vidunas, executive director of Equality Health Center in Concord. For men who need clarity, “I’d ask, ‘How easy are your prostate exams?’ Is that comfortable?” Vidunas said. “It’s like having your doctor in there checking your prostate for five minutes.”

The procedure also carries about a $400 to $500 expense for uninsured women and co-pays for those with insurance.

The ultrasound is required to determine the fetus’s age, though one lawmaker said during a legislative debate an ultrasound image would also allow a mother to connect with her baby.

Vidunas said gestational age can be determined by taking a woman’s medical history and date of her last period. Those steps, she said, are appropriate, non-invasive ways to identify gestational age in early stages of pregnancy, which she said account for 85 to 90 percent of abortions.

The law, which Gov. Chris Sununu signed as part of the budget, takes effect Jan. 1. He has said that he could not veto a whole budget during a pandemic over the law. It’s a position – and an issue – that will take center stage leading up to the mid-term elections. He has also described it as no more restrictive than other states’ bans on later-term abortions, though many of those don’t include New Hampshire’s ultrasound requirement, threat of criminal charges, and lack of exception for a fatal fetal anomaly.

“Politically at stake will be highly motivated voters (especially women) who will want a real demonstration of his pro-choice commitment,” said Wayne Lesperance, a political science professor at New England College. “Anything short of that will make the race that much more difficult. “

There is disagreement about whether the failure to perform an ultrasound during a legal abortion could trigger criminal penalties, though the law does not explicitly exempt the ultrasound requirement from criminal charges.

That debate doesn’t matter to abortion providers, who say they will follow the law’s requirements. The risk of a civil suit from the fetus’s father alone is also one they are unwilling to take.

“As health care providers, we are obligated to comply with all state laws, regardless of whether or not they are supported by medical best practice,” said Kayla Montgomery of Planned Parenthood of Northern New England Action Fund in an email. “This is precisely why politicians in Concord shouldn’t be legislating private medical procedures.”

Equality Health Center did perform ultrasounds on all abortion patients prior to COVID-19. They stopped doing so except when medically necessary once pandemic health concerns required them to limit contact with patients. The change has been good for women, Vidunas said.

“I think Equality is the perfect place to look at in terms of necessity (of ultrasounds),” she said. “Our patients are not having outcomes that are adverse because of fewer ultrasounds. It shows that taking correct (medical) histories and having those discussions, you can eliminate a large amount of ultrasound being done. When did anybody say having an unneeded test was good?”

Asked in a radio interview last week about the ultrasound requirement, Sununu said he thought it applied to only months seven, eight, and nine, but then said he wasn’t sure, adding the abortion legislation was added to the budget bill at the last minute. (It was in the budget, which he signed in June, as early as early May.)

“The governor’s statement is incorrect,” Montgomery said. “This summer Governor Sununu signed New Hampshire’s first modern abortion ban into law, and it is clear – effective January 1, 2022 – every person seeking abortion care must first undergo an ultrasound to determine gestational age, even if it is not medically necessary.”

Sununu spokesman Brandon Pratt said in an email that Sununu is pro-choice and is working with lawmakers on legislation repealing the ultrasound requirement and adding exemptions for rape and incest.

Sununu’s confusion over the ultrasound requirement was one of two abortion-related statements he made in recent weeks that drew unwanted attention.

Sununu was asked at a press conference in late November how he would protect abortion access in New Hampshire if the U.S. Supreme Court upholds Mississippi’s 15-week abortion ban, which is widely seen as a threat to Roe v. Wade. (In a legal brief this summer, Mississippi’s attorney general asked the justices to see it as such.)

“That is not an overturning of Roe v. Wade,” Sununu, who identifies as pro-choice, said. “It has to do with viability and all this kind of other stuff. So no, I’m not really paying attention to that case, and we’ll see where it goes, but that case does not decide Roe v. Wade.”

Asked about the remark, Pratt said the matter before the court is whether all pre-viability bans are unconstitutional. “The court does not have to overturn Roe to decide this case, and the governor hopes that they will not do so in their ruling, nor does he expect that they will,” he said.

That is not how Montgomery sees the case. “To be clear – the state of Mississippi is asking the Supreme Court to uphold their 15-week abortion ban and overturn Roe v. Wade,” she said. “The future of abortion access is at risk, and we should all be paying attention.”

Lesperance called Sununu’s remarks “unfortunate for a number of reasons.”

“For the pro-choice community, they see (the case) as an existential threat to Roe. The governor’s response came across as flippant and dismissive,” Lesperance said in an email. “For pro-life individuals, the … case represents the greatest opportunity to overturn Roe and make abortion rights a states decision.”

He added, “For both camps, the stakes are incredibly high. I understand the governor’s strategy of wanting to avoid getting pulled into what is likely to be one of the biggest issues of the mid-term cycle.”

Thu Dec 16 , 2021
ELLIOTT, Iowa — A coalition of California restaurants and grocery stores has filed a lawsuit to block implementation of a new farm animal welfare law, adding to uncertainty about whether bacon and other fresh pork products will be much more expensive or in short supply in the state when the […] 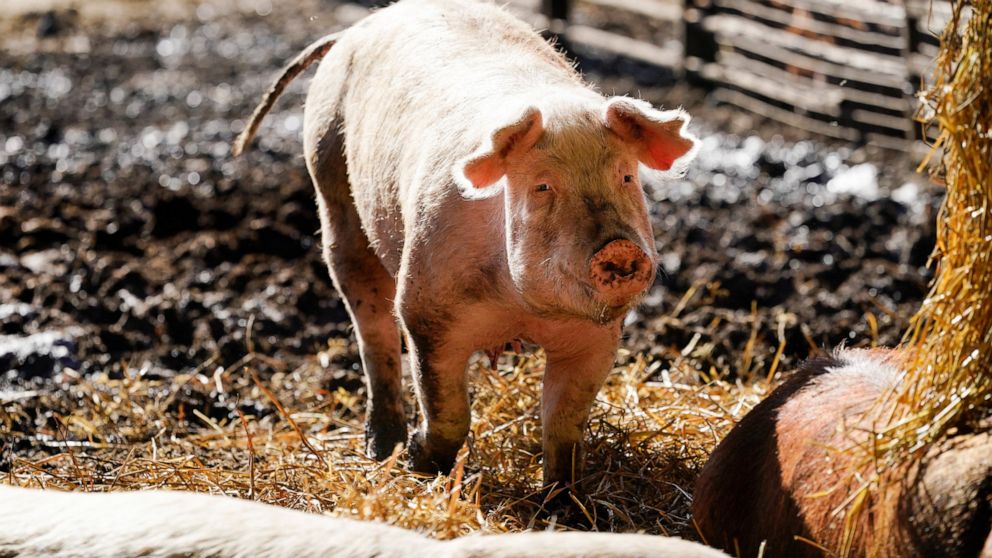