HONG KONG — A Taiwanese American star known as the King of Chinese Pop is in career free fall amid a messy public divorce that is the talk of the Chinese-speaking world.

The singer, Wang Leehom, 45, was born in Rochester, New York, to Taiwanese parents and grew up to be a hugely popular singer-songwriter and actor in Asia. He had been held up as a role model for Chinese men by his fans, in part thanks to his longtime relationship with his former wife, Lee Jinglei, 33. The couple have three children.

But Wang is taking a break from performing after he offered a public apology in a scandal that has highlighted the fragile status of both celebrities and women in modern China.

After Wang confirmed speculation that the couple had divorced, Lee posted a lengthy online missive last weekend accusing him of infidelity and emotional abuse and of having hired prostitutes.

Wang responded, setting off a social media war that undermined the clean-cut image he had cultivated as a husband and a father.

The dayslong dispute prompted interventions by his father and the Chinese Communist Party; brands, including a luxury carmaker and a jewelry company, also dropped their deals with him.

Wang apologized last Monday to his family and fans, many of whom had criticized him on the Chinese social media site Weibo, where the story was the top trending topic.

“After thinking it over, I should take all the responsibility as a man. I will no longer provide any explanations or defense. I didn’t manage the marriage properly, caused trouble for my family, and didn’t give the public the image that an idol should have. It was all my fault,”  he wrote on his Facebook page.

“I am going to quit work temporarily and set aside time to accompany my parents and children to make up for the damage caused by this turmoil,” he wrote.

Wang has not responded to a request for comment.

Wang is far from the only major celebrity to have faced public backlash in China this year.

The ruling Communist Party under President Xi Jinping has embarked on a crackdown on celebrity and fandom culture as part of an effort to exert greater control over both the lucrative entertainment market and the lives of the young audiences who may be influenced by their idols.

Last week, Huang Wei, a Chinese internet celebrity known as the “queen of livestreaming,” who also goes by the name Viya, became the latest high-profile figure forced to pay a hefty fine for tax evasion. A popular actor, Zheng Shuang, was similarly fined in August after an investigation that followed a surrogacy controversy in the U.S.

Xi, speaking recently at a major conference of artists and writers in Beijing, warned his audience to “treasure their social influence” and watch their behavior. A commentary published Dec. 19 by an anti-corruption body, titled “Morality Comes Before Artistic Work,” was widely interpreted as criticism of Wang, even though it did not mention him directly.

“This is part of a larger movement to strengthen the regulations on the economy,” said Jing Vivian Zhan, an associate professor of politics at the Chinese University of Hong Kong, citing recent crackdowns on Chinese tech giants such as Alibaba and Tencent.

“In general, the Chinese government wants to set up stricter rules for market activities,” she said.

The Chinese government and society’s high standards for stars send clear signals about the kind of behavior that will be tolerated. As Western brands and celebrities have also found, the fall from paragon to pariah can be swift.

“Clearly, these public figures and celebrities are expected to be role models,” said Pan Wang, a senior lecturer at the University of New South Wales in Sydney and author of the book “Love and Marriage in Globalizing China.”

Lee’s allegations certainly came as a shock to Wang’s fans, like Michelle Yap, 38, a hotel manager in Kuala Lumpur, Malaysia, who met him when he visited the country in 2005.

“I was in disbelief when I first heard about the news. It was out of his character,” she said. “With so much information flooding in, I felt so confused.”

The scandal surrounding Wang has not only underscored the precarious status of celebrities in China, but also stirred discussion about why Chinese women stay in unhappy marriages.

In her first post outlining her fallout with Wang, Lee said, “Whether it’s women in the past or in modern times, choosing to be a housewife is choosing a payless job.” Without a paycheck, she said, women risk losing the right to have their own savings and financial agency.

With men as traditional family breadwinners, even close relationships can come with unequal power dynamics.

The state-affiliated newspaper Global Times ran an opinion piece noting that the saga had highlighted the plight of “desperate housewives.”

Faced with rising divorce rates and falling birth rates, the Chinese government has sought to reinforce traditional family values. A new law this year imposed a 30-day “cooling off period” before couples can divorce.

It appears to have had the desired effect, according to data from state media, which show that the divorce rate dropped by 70 percent in the first quarter of 2021.

Women greeted the controversial law with anger, but Beijing appears to be taking steps to assuage some of their concerns. The top lawmaking body last week debated legislation that would give women new safeguards in the workplace and during pregnancy, Reuters reported.

“If women plan to have children, that means they need to take care of them, and that will really shrink their personal space for career advancement or for socialization, leisure activities,” said Pan Wang, the lecturer and author.

“Some women do see divorce as a fresh start, a new chapter of life,”  she said.

Lee certainly did. She posted on Instagram once again Thursday, saying she hoped to “put an end to the continuing turmoil.”

Mon Jan 3 , 2022
Ghislaine Maxwell’s conviction for recruiting young girls to serve Jeffrey Epstein’s sexual desires set a marker: Enablers are not safe from criminal prosecution. In that sense, her conviction was an important first-of-its-kind moment in the #MeToo era. But real progress still demands a reckoning with an uncomfortable truth. In the […] 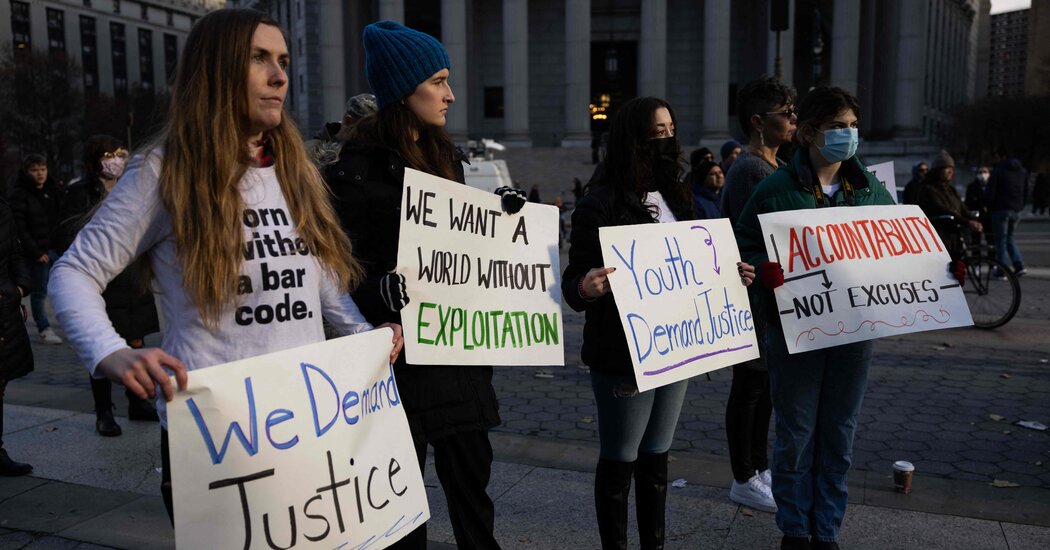