Editor’s Note: In the third piece in our series on Big Law and pay equity, Erin Mulvaney reports on why new pay transparency laws alone won’t remedy compensation disparities within the legal industry.

A much-anticipated law in New York City and similar measures by states may spur greater pay transparency, but some legal industry observers say the laws won’t have widespread impact at firms, where entrenched compensation practices have fueled pay inequities for women and attorneys of color.

The New York City law, originally set to take effect in May, but now slated for November, requires employers to disclose pay scales for new positions. New York state also has a similar measure pending before the governor

Other cities and states are considering or have adopted similar laws, including in Colorado, Nevada, and Connecticut, bucking trends in the business community to keep pay private. The idea, lawmakers and pay equity advocates say, is that pay gaps stem from the lack of information about what peers get paid.

“The movement toward disclosing salary ranges is really important and creates an opportunity to have a transparent conversation about how compensation is being set,” said Saba Bireda, partner at Sanford Heisler Sharp LLP in Washington, and co-chair of the firm’s discrimination and harassment practice group.

The New York City pay transparency law is set to include amendments pushed by the the business community when it’s slated to debut in November. The changes include exempting companies with fewer than 15 employees, and restricting job applicants from suing employers over their job ads.

The city will join a handful of states in requiring that salary range information be included in job postings. Laws in Connecticut, Nevada, Rhode Island, and Colorado require some proactive disclosure of pay scale information to job candidates.

California and Maryland since 2018 and 2020, respectively, have had laws on the books that require employers to provide a pay scale to external applicants who request the information during the hiring process. And in a law that will take effect in 2023, Washington state requires employers to provide the pay scale of positions to both external candidates and existing employees but only upon request.

According to the National Conference of State Legislatures, a bill is currently pending in Massachusetts, requiring salary disclosures when requested by an applicant, or by a current employee asking about their own position. South Carolina has introduced legislation this term requiring wage range disclosure upon applicant request. West Virginia has also put forth pay transparency legislation, but it failed to pass last year. And California has a proposed measure that would strengthen its existing laws.

Attorneys say that these laws will likely spread across the country, increasing the chances of litigation for businesses.

“State laws are constantly evolving and there is a lot of legislation around this area,” Chris Wall, a partner with Stoel Rives LLP in Seattle, said. “All of that movement around compensation and negotiation, and workers changing jobs, creates possibilities to run afoul of equal pay laws.”

On the other hand, with a tight labor market, law firms and companies are fighting for talent — handing out retention bonuses or pay increases for existing employees, Wall added.

The Covid-19 pandemic led to a shift of lateral moves in Big Law and created a frenzied hiring market for associate talent. The number of lateral hires made by the nation’s top 100 firms in 2021 rose by nearly 24% from 2019. And the percentage of those hires that were racially diverse rose slightly from 3.14% to 4.95%, according to data from Firm Prospects, a firm that provides analytics about the legal industry.

At large law firms, associate pay, at least, is generally, not a mystery. Entry-level attorneys are often paid in a lockstep system. But full compensation as they move up the ladder can include a range of bonuses stemming from differing compensation structures and origination credit practices, which reward lawyers for drawing new client business.

Sanford Heisler’s Bireda said without transparency laws and policies, often the only way workers realize they are underpaid is through “water-cooler conversations” with colleagues. She said with law firms, compensation decisions are often confined to a small group of people, and there are structural issues that allow these inequities to continue.

“Associates are being paid in lock-step, but when it comes to bonuses, and partnership compensation, law firms often use subjective criteria as the basis for this pay,” she said. “When firms are using those really subjective criteria, it tends to have a bias against underrepresented groups.”

In Big Law, associate pay, which is widely publicized, represents a tremendous amount of transparency in the legal industry, said Kenneth Gage, a Paul Hastings LLP labor and employment partner in New York. Because the pay is widely known, the law in New York won’t have a major effect in the legal profession, he said.

Yet, Gage says pay differences are more common among partners, as attorneys progress in seniority. Partner searches, he said, are commonly done confidentially and without postings. He said even the lateral transfer process is qualitatively different from a firm filling a job opening with an outside hire because they are drawn to firms through recruiters and a decision by that attorney to move business to a different firm.

However Gage added that data on aggregate pay gaps doesn’t tell the whole story about compensation practices among law firms. He said the issues that lead to inequalities require a constant dialogue and a focus on creating equal opportunities.

“But to be sure, the discrimination does still go on. Those who say it doesn’t happen are naive, but I do think it isn’t as widespread,” as the aggregate data often suggests, Gage said. “We still have a long way to go in the profession, but many firms are focused on this as an important priority.”

He also said there are many different types of lawyers, which can’t always be easily compared.

“The legal industry is not a very diverse profession as a whole. When you have that diversity gap, it leads to pay equity issues,” said Ebony Morris, an attorney with Garrison, Yount, Forte & Mulcahy in New Orleans who has written about equity in the legal industry. “These issues are so ingrained in the legal profession, that these laws may help a little, but I don’t think that they will provide meaningful change.”

Still, there are signs of some evolution. Major Fortune 500 companies have made more demands for diverse law firm teams to work on their matters—which can lead to better opportunities and compensation for women and attorneys of color as they move up the ranks.

Facebook, HP, and Novaris are among the large companies that have warned clients they’ll take work elsewhere or cut fees unless there is more racial and gender diversity in the firms they hire. Firms have struggled in this area, but said they are working on ways to improve. Some are also examining how their work allocation and origination credit systems may lead to disparities, for instance, in compensation.

The number of women represented as partners at firms reflects “significant attrition” compared to representation among law school graduates and law firm associates, according to a recent survey from the National Association of Women Lawyers.

For example, in 2020, women made up 47% of associates at law firms, but only comprised 22% of equity partners. Only 12% of women were firm managing partners, the survey found.

As women lawyers rise through the ranks to equity partner, the pay gap for women increases. The gap has also increased since 2005. That year, female equity partners made 84% of what their male counterparts made. But in 2020, they made 78% of what their male counterparts made according to the survey, showing a widening of the pay gap. At the associate level, women made 95% what the men made on average. 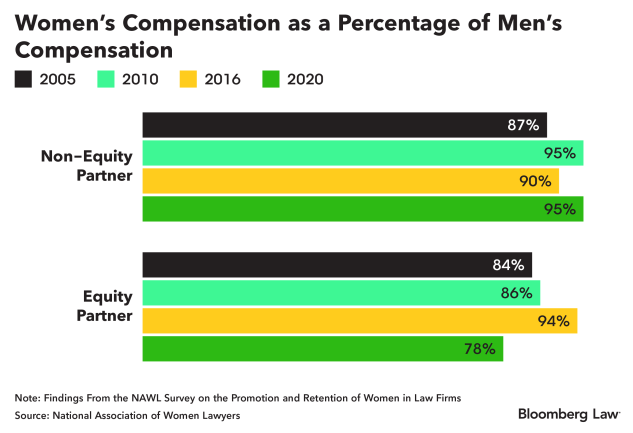 Other prominent firms including Winston & Strawn and Chadbourne & Parke have defended pay bias claims brought by female lawyers in the last five years. Many of these cases have been settled, dropped, or moved into arbitration.

“Law firms feel pressure to pay attention to these issues, obviously, if you just look at litigation for the past few years,” Bireda of Sanford Heisler said. “Being sued for pay equity issues is not great for law firm publicity, and they are out there recruiting the best and the brightest and you don’t want to have a pay equity lawsuit going while you are trying to recruit new associates.”

Sanford Heisler, which has brought many of the high-profile cases against the Big Law Firms, faced allegations in 2020 from legal assistants who issued a letter that June claiming the firm refused to address concerns of gender and racial discrimination.

In a comment emailed for a November 2020 Bloomberg News story, firm chairman David Sanford said that an outside investigator looked into the claims and concluded they didn’t reflect intentional bias, but “were isolated ‘one offs’ and represented ‘insensitivities.’ ” The firm said it implemented diversity training for all employees.

VIDEO: If Women Still Earn Less, Can Laws Even Fix The Pay Gap?

Though doubts persist on the impact the New York and other pay transparency laws could have on the legal industry, one lawyer who practices there believes the law will certainly impact her clients.

Melissa Camire, a New York-based partner at Fisher Phillips LLP, which represents employers, said even though the business community is wary of the new laws, including in New York City, it appears the trend in legislation around the country is headed toward transparency.

Many of her clients, which include startups to multinational companies across a range of industries, are considering posting ranges nationwide. Businesses should conduct pay equity audits to get ahead of this trend, she said.

“This is a good inflection point. More transparency may at best lead to discontent, and at worst, a pay equity lawsuit,” she said. “This is where the laws are going and rather than dealing with a patchwork, many companies are updating policies across the board. It’s a mixed bag for businesses.”

For his part, Paul Hastings’ Gage said the New York City law could provide the impetus for some change at law firms. “There is pressure, but I think it’s good pressure. The transparency issue is a good start. It needs to happen at the top and needs to be a continued discussion among clients and managing partners.”

13.3% of Springfield adults are divorced, higher than U.S. Average; according to study 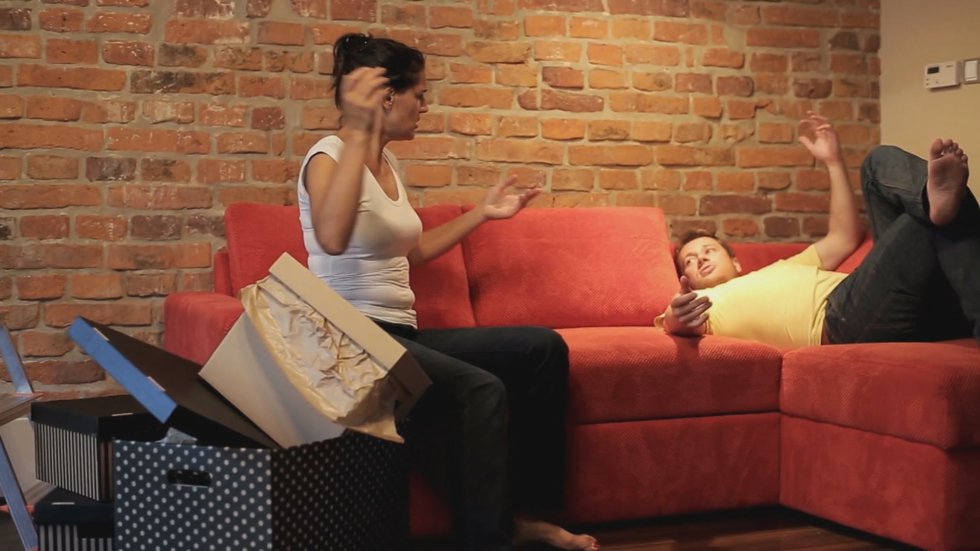